Who Are You Hanging With? 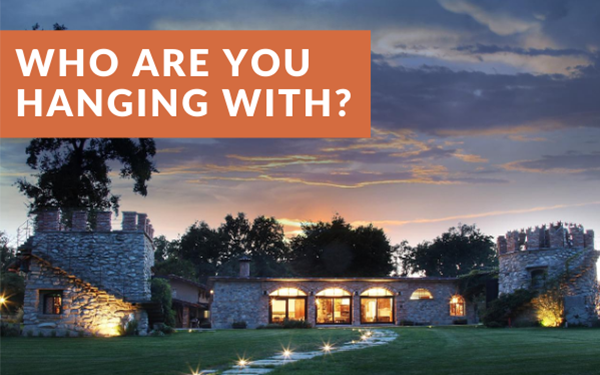 So, this is on my mind because I was thinking about an event I had gone to a while back — a marketing conference with 4,500 people. I remember that I felt awesome to be surrounded by a bunch of people who were excited about the same thing.

Everybody there was pumped and positive, talking about marketing successes. From a woman who wrote a book about beating alcoholism to a single mom who sells homemade soaps and RE investors too…

All sharing marketing techniques that have brought them millions of dollars.

I realized when I surround myself with people who have positive mindsets and are even doing better than me — that when I expressed my concerns and challenges, this amazing group lifted me up.

They’d say, “Yep, that’s a challenge, but you can do it! I’ve had that before, this is what I did to overcome it.” And, “Have you thought about doing this? Have you looked at it this way?”

Surrounding yourself with people who are excited about the same things you are is so refreshing. I think everybody needs to do that.

When you can, go to an event like that or to a Mastermind or a coaching program event…. heck, go hang out with like-minded people from a Facebook group.

There are so many people out there who can discourage you. They breed negativity. Yuck. Be careful who you take advice from.

Take your advice from people who have been there, done that.

That’s where the keys to success are.

People who tell you that you CAN do this.

Keep this in mind: If you were to stand on a stool, it’s a lot easier to pull people down than to lift them up, isn’t it?

Make sure you’re not hanging around people who are going to pull you down.

Rise up with the right people around you.

More of THIS, Less of THIS