Say No to These 5 Things 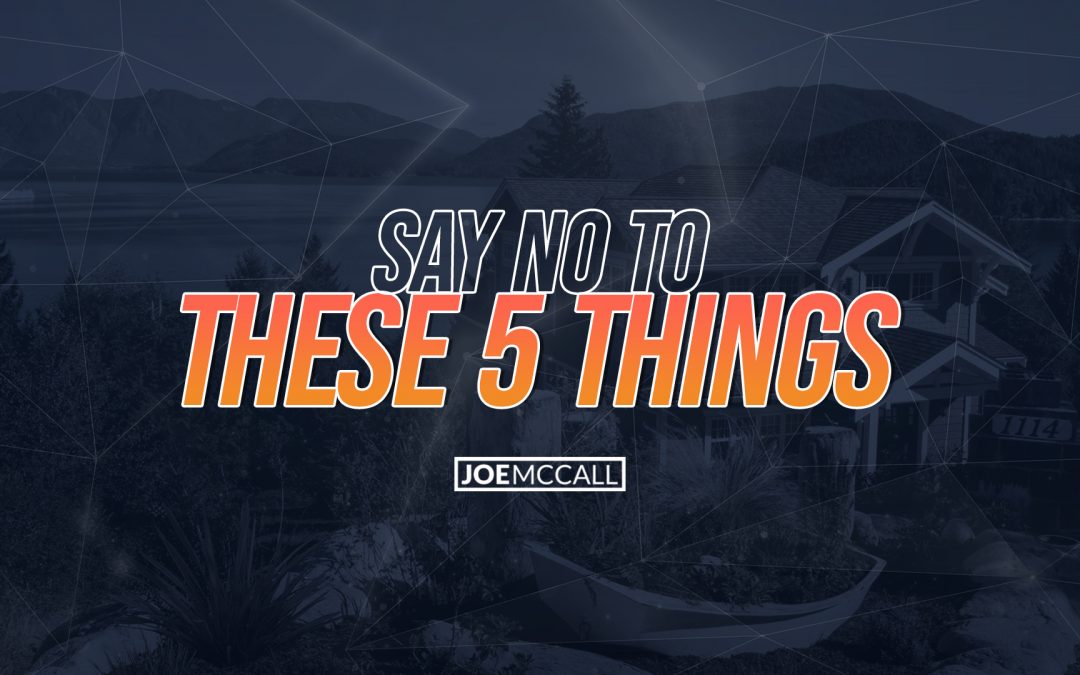 Well, today I’m packin’ the beginning of a 1-2 punch… I’ve got one email today, and then I’m going to follow it up with another related one.

Maybe I didn’t have a choice. Maybe I didn’t know better, but I realized pretty quickly that if I just relied on myself to do the marketing, it was never going to get done. I tried time-blocking it on my calendar, I claimed I was committed to doing it… but it just never got done. It was really, really frustrating.

So, I’d go through these vicious cycles where I would do some marketing and get a bunch of leads, and then get super busy working the leads and stop marketing. Obviously, my lead pipeline dried up.

Then I’d be in a panic mode because the money would disappear pretty quickly from the deals I had closed, and it’s not like you can just flip a switch and the leads start pouring in again. There’s this real principle of momentum.

So, my biggest mistake early on was thinking that I had to do all the marketing myself or thinking that nobody could do it better than I could. But when I hired my first virtual assistant, everything really radically started changing because I was getting a consistent flow of leads.

And because I was getting a consistent flow of leads, I also started closing more deals… because when I was talking to sellers, if they didn’t want to do a deal, I wasn’t stuck in this mode of trying to turn a non-deal into a deal. I wasn’t a motivated buyer! 🙂

I had a lot more confidence in my positioning, I was a lot stronger, and I was okay if they said no. I wasn’t chasing the deal. I was not as concerned about the outcome because I had 100 other people to call and talk to and follow up with. Your $500-an-hour activities are talking to sellers and making offers. You should not be the one doing the letters, sending the texts or emails or even making the offers on the MLS.

Eventually, you need to get to a point where your goal is to have somebody else doing ALL that for you.

With lease options especially, I was the one taking pictures of the properties and putting them on websites. At the time, I was using Postlets and vFlyer. And, I’d put it on my website, then I’d record an outgoing voicemail. I would do the bandit signs, the property flyers, the Craigslist ads, try to handle all the calls, show the property…

No wonder I couldn’t handle the marketing. I was doing ALL the other work trying to sell the properties. So, since my assistant is a licensed agent, she does all that. Or, you could find a Realtor to market the home — but only pay half a month’s rent for that. Not all Realtors do that, most want a full month’s rent, but I work with Realtor’s who’ll take half. After all, you’re looking for leasing anyway.

So, you shouldn’t be advertising your homes yourself — whether you’re wholesaling or doing lease options, add a manager to your team for that or have an assistant do it.

#3: Visiting Houses and Talking with Sellers

Okay, I know that what I’m about to say goes against the grain… a lot of other people do this, and sometimes I even teach this — so, I’m not saying you shouldn’t do it, I’m just saying I wouldn’t. Big difference.

So, I didn’t like going to look at houses, sitting there with a seller for an hour, trying to build rapport and pretend I’m interested in whatever they’re interested in. It was a huge time suck, and I just didn’t want to be in that position anymore. After a few times, I realized that I hated it!

There were too many times when I thought there was a deal before I made the appointment… but then when I’d go meet the seller at the house, we were miles apart on price. Huge waste of time.

So, I just started making my offers over the phone, and instead of scheduling an appointment to go look at the house, I would tell them:

“Well, I’d love to go see your house, but I want to make sure I’m not wasting your time.
Let’s just talk about the numbers right now. You can always send me some pictures. And, I can have my guy go look at the house.”

And if that’s a deal killer to them, well then, they’re not really that motivated and I’m not really that interested. So, I’d negotiate and make my offers over the phone… and because I was doing lease options, they were a lot easier.

So that was a huge game-changer. Now I can just make offers over the phone instead of making appointments to go see the house. When we actually have a deal is when I make an appointment to go talk to them about the lease option and walk through the contracts.

#4: Lunch/Coffee Meetings to Pick My Brain

So, I used to say yes when people wanted to take me to lunch or grab a coffee or beer and ask me REI questions. I used to give away a ton of knowledge for free.

And here’s the super frustrating part: almost everybody I did this for never took action on anything I told them. I can’t think of one person who actually did what I told him/her to do and made money with it and started having some success.

I think there’s a principle in that. People only value what they pay for. So, I just can’t meet up with people to give knowledge and advice and answers away for free. If I did that, I literally would not get anything done. (And remember, my emails and podcasts share TONS of info for free.)

If you’re the person doing all the asking that way, it shows you don’t value my time and expertise. I spent tens of thousands of dollars on my education. I spent hundreds or maybe thousands of hours studying this… and it’s worth something.

Instead, approach it from this perspective: “Hey Mr. Investor, I’d like to bring you more business, more deals. Do you mind if I ask you a few questions about what you’re looking for? Then, I’ll go out and find it.”

So you’re showing them that you want to help them make more money. If I’m the investor, that would be much more exciting for me.

And BTW, now, I tell people to go buy my course, and when they do a deal and give me a testimonial, I give them the cost of the course back. But they have to invest some time and money into it first.

Don’t get distracted by a shiny object, a new strategy, a new secret, a new hack, a new trick. Don’t make the mistake of thinking: ‘If I just learn this one thing, that will make all the difference, and I’ll start making a lot of money.’

I used to be guilty of it. I’d get all excited and buy all these courses — and I eventually realized that shiny objects make you blind, but focus makes you rich.

I didn’t start actually making money and doing deals until I buckled down and focused on just 1 strategy. For me, it was wholesaling using Cris Chico’s postcards.

So, those are the 5 things I used to say yes to but now say no to. Take a hard look at your business and see if you should be saying no to some of those things as well.

And as promised, my next email is going to be about the 5 things I used to say no to, but now I say yes TO

YOU Do Need to Do These 5 Things