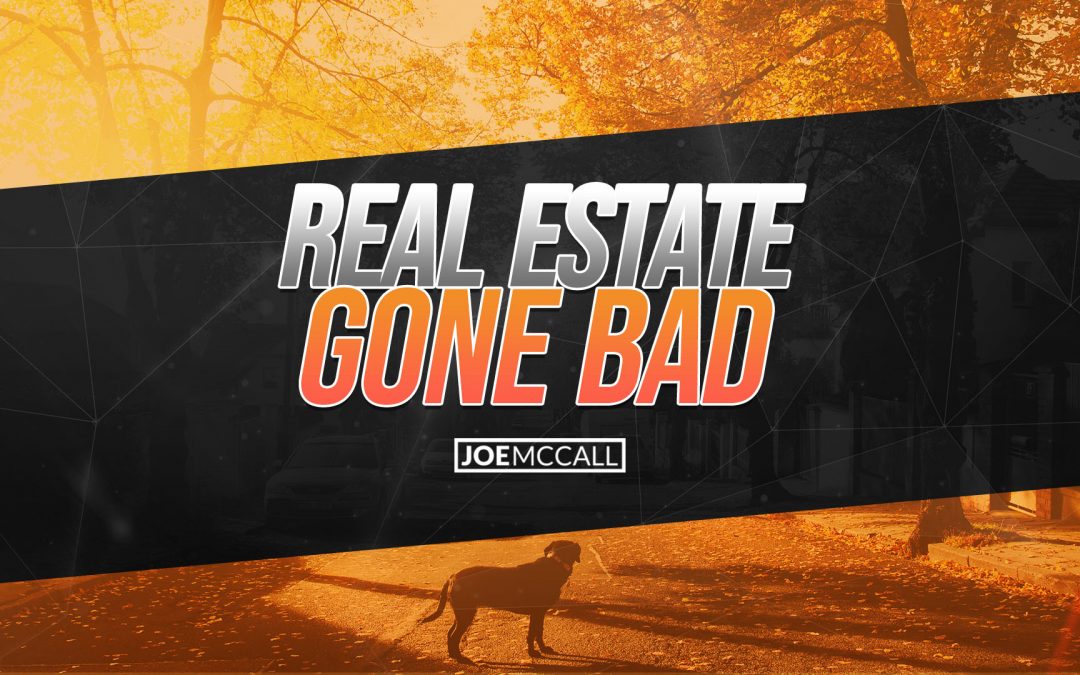 Do you have a real estate deal that went bad? Look, if you’ve done even just a handful of deals, you probably do. We’ve ALL experienced a deal that went south. (Or a few.) I’m bringing this up not to scare you, but so that we can learn from each other’s mistakes. So, I was talking with some friends about real estate gone bad… Let me kick this off by sharing the absolute WORST way to buy real estate: Buying a subject to, then selling it as a lease option.  TERRIBLE IDEA! This just plain does not work. Let’s play this out… So, you buy the property as a subject to and take over the mortgage. Your goal is to have the tenant-buyer take over the mortgage in a year or two. The seller wants out, right? So, you’d probably get in at .75 cents on the dollar, and it would give you a couple of hundred dollars in cash flow each month. But you’d need to fix it up a bit. So you’d borrow private money by creating a second note and putting the investor in the second position. With that money, you’d catch up the mortgage, probably give the seller some money, fix up the house…  …and you might also borrow some profits early (DON’T EVER DO THAT!). Then, you’d inflate the value of the property, and tack on another 5%–6%, thinking the market would go up.  But if the market doesn’t go up or worse, there’s a huge crash like in 2007/2008—you’re screwed, my friend. Your value drops from say, $180k to $120k, your tenant-buyer can’t buy it because he/she can’t get a loan and likely has to move out creating a vacancy and your private investor wants their money back. Yikes. Negative cash flow. Negative equity. The mortgage payment is still on you. The private investor is pissed because their money is tied up in your crappy deal. And, you can’t buy the property because you have no money, and the seller starts harping on you because it is time for the property to be sold so they can be out of the deal. Nightmare. Okay, even I’m guilty of doing this. I ended up having to rob Peter to pay Paul just so I wasn’t late on any mortgage payments. It was a horrible situation. And, just imagine if the bank had ever called the loan due. HORROR!  How did I get out of those kinds of crappy deals I was in back then? I had to put the deed back in the seller’s name, obviously after talking with them. I said I can’t make the mortgage payments anymore, but the tenant-buyer is still there and they’ll pay you rent that’ll cover your monthly mortgage. Man, I get stressed just writing about it. It is the worst. I know people who did this, about 50 times back then… and they’re still digging out. Shame. See, with subject to, you’re more obligated. The deed is in your name for cryin’ out loud! I hate subject to.  I strongly encourage you to stay away from subject to deals. Don’t buy properties expecting the market to go up. Don’t use inflated numbers. Ever! Always have money in reserves when you’re doing any kind of deal. And be conservative with your numbers. Set your prices based on today’s market value. If that number doesn’t work for you, then it’s not a good deal and you should simply walk away. Learn this lesson and avoid disaster. (You’re welcome.)

This is a REALLY great Q

Are you asking the questions?