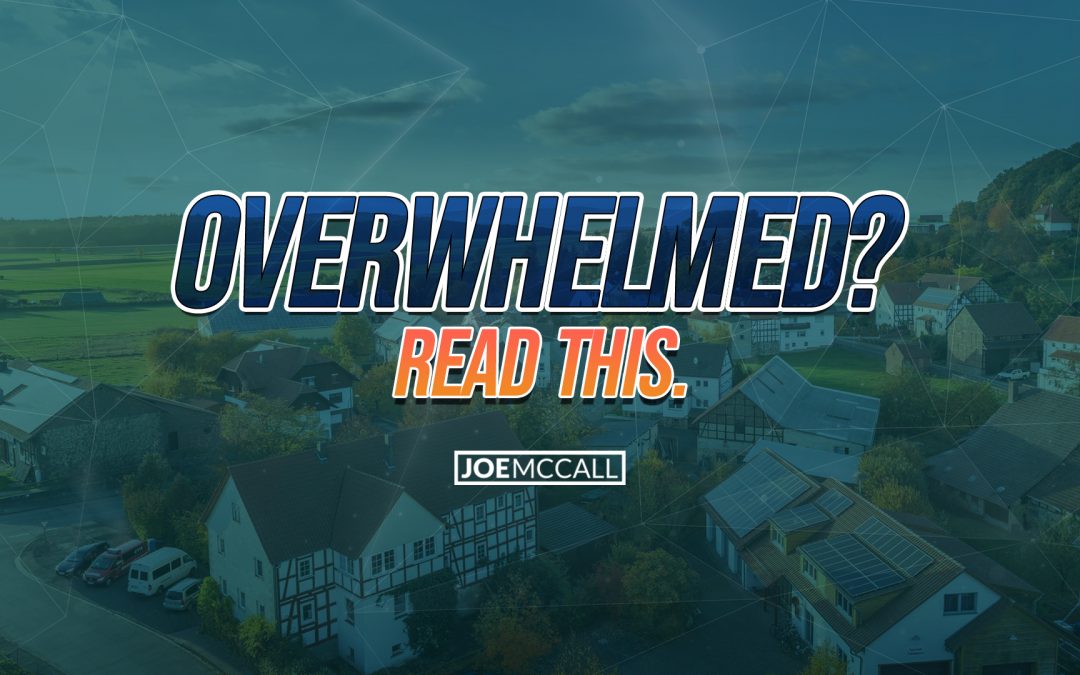 It happens to all of us… work gets overwhelming.

So today, I want to talk about how to reduce the overwhelm. It becomes really simple when you just have 1 thing that you’re focusing on.

I know, easier said than done sometimes, right? But, go with me on this… it’s good.

If you’re overwhelmed, you’re focusing on too many things. Ask yourself: What is the 1 thing in my business that deserves my attention?

The Pumpkin Plan by Mike Michalowicz really explains this well.

He talks about how pumpkin farmers plant seeds, and when pumpkins start to grow, they look for the most promising little baby pumpkin… and then cut off all the branches on all of the other pumpkins. So all of the nutrients that come from the roots are all fed into that 1 pumpkin. They focus all of their time and energy on that 1 pumpkin. That’s how you grow giant pumpkins (an giant profits).

And, that’s how you grow giant businesses. It’s all about focus. It’s finding your sweet spot and focusing on that. Yeah, it’s a little scary. It’s scary for me sometimes, but I know it’s going to be my most profitable avenue.

So, if you’re like me, you like to-do lists. Problem is, I use my list as a brain dump and it gets huge and — you guessed it — overwhelming. And then I never look at it… a month later I see it, and well, most of that stuff hasn’t gotten done.

Now, I focus. I write down only 3 things that I have to do that day. And, I like to write them down the night before, so I don’t wake up in the morning stressed and thinking: What am I going to do today?

Just 3 simple things for my business. I don’t include personal or family stuff on that list.

Usually, I’ll ask myself: What’s my fastest path to cash right now? What’s my most important thing I could be doing? What’s going to give me the highest return on my time?

Well, maybe it’s marketing or making offers or doing my podcast. I pick one.

Now, you have momentum and you become a productivity beast, and you start getting a lot done because you’re only focusing on that next step. It just becomes easier.

Or, you’ll make five offers on the MLS. Or, you’ll send 500 postcards this week. Just focus on 1 thing. Not ALL of those things.

If your 1 thing is marketing, break that down:

Boom. There you go.

So much less overwhelming.

I knew a guy in California. Super competitive market, right? He sent 100 letters to just two ZIP codes. He focused on that 1 marketing channel in that 1 little farm area. And, he started doing more deals, bigger deals…

It’s the power of focus.

And keep this in mind: Give yourself permission to not have every little thing you have to do on your to-do list.

If I have to make a couple phone calls today, I’m not putting those on my to do list. If I let myself do that, all of a sudden I’m going to have 20 tasks — and it’s going to be overwhelming. I’m not going to get it all done, and then at the end of the day I’d get depressed and discouraged and bummed out.

So, only have 3 things on your list and make sure those 3 things are aligned with your 1 thing.

Get out there and make it happen.

You’re NOT an RE investor