Marketing Done for Me Inspite of Me 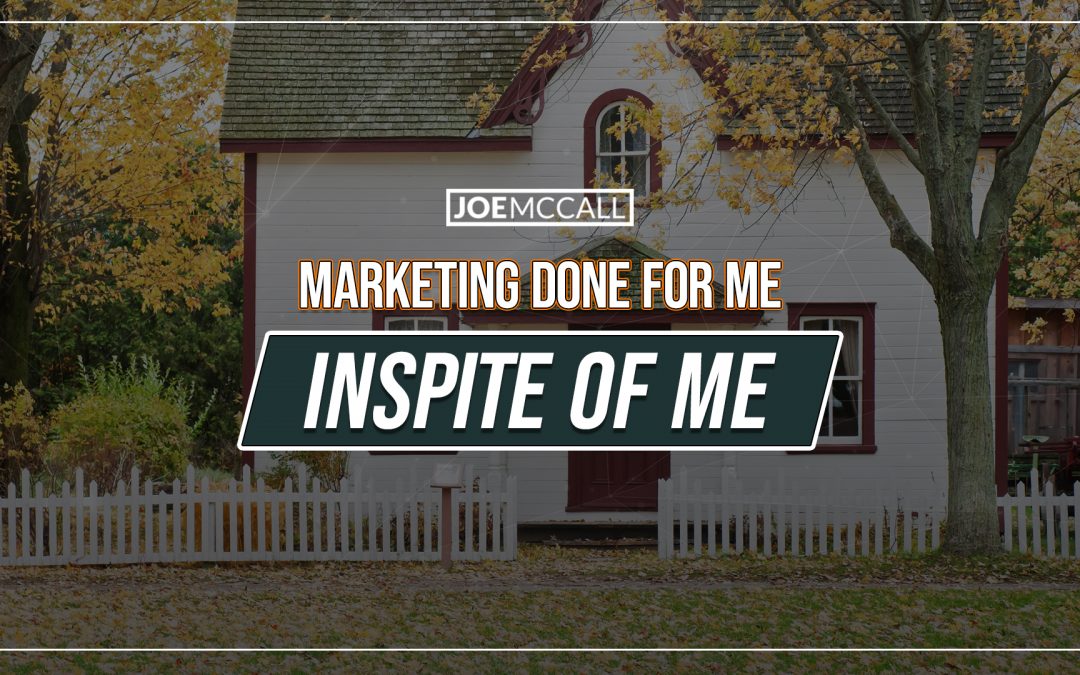 Today, I’m talking specifically to those of you who have done deals in the past… and you’re frustrated because you’re stuck and not doing deals anymore.

You had a spurt of success, you were doing some deals and now, nothing.

Well, I’ve been there. I know it sucks. But read carefully: Keep fueling the fire.

I want to encourage you to keep going. Stop changing things and just stick with what works. And that starts with marketing.

We’re not in the real estate business, we’re in the marketing business. You should always be marketing.

Leads are the lifeblood of your business, and you need to get the marketing done for you in spite of you.

Here’s what I mean by that…

When I was a newbie, I would do a bunch of marketing, get a bunch of leads, and then I would get really busy working those leads and getting properties under contract. I was dealing with all the leads and I stopped the marketing.

I wouldn’t send out another batch of postcards, I wouldn’t do any more texts or emails to Craigslist ads. I stopped the marketing and worked the deals I had under contract, finding buyers to get them sold. (Remember: Just because you get a property under the contract does not mean you get a payday.)

A couple of months would go by, and I would make some money on some deals, and I’d be all excited. But then leads would dry up because I hadn’t been doing any new marketing while I was working on leads in my pipeline. (Facepalm.)

Empty lead pipeline again. No new leads coming in, and I’d freak out because my money was gonna run out too.

You’ve got to keep that marketing fuel-burning — keep feeding it, because when you need it, it’s going to be there for you.

See, when you start the marketing, it takes 2, 4, 6 weeks before you start getting deals out of it. Why? Because most of your deals come from the follow-up. Sellers usually don’t say yes the first time your marketing reaches them. Like, barely ever.

You’ve got to be consistent to build momentum.

I finally realized I couldn’t handle the marketing and the leads. That’s when I hired someone to get the marketing done for me in spite of me. (Credit to Gary Boomershine for coming up with that line.) I had to get out of my own way.

I hired a virtual assistant strictly for marketing. At first, she was only sending emails and text messages to Craigslist and Zillow ads.

We started getting leads consistently every day without my involvement. It was a beautiful thing.

Then I hired a direct mail company to send out postcards. I was feeding the flame… by having someone else do the marketing.

While VAs and DM companies do the marketing, you’re going to be busy talking to sellers and making offers. And… closing deals.

So my whole point is: Keep the fire burning. Your marketing fire has got to be roaring constantly.

And, make sure you stick with the marketing that works — that gives your results. Stop chasing shiny objects. If direct mail is working, then stick to it. Just do it continuously. That’s all.

Now get out there and make it happen. (Er, hire someone else to make that happen.)

What I’d Tell My Newbie Self