You can’t improve what you can’t measure 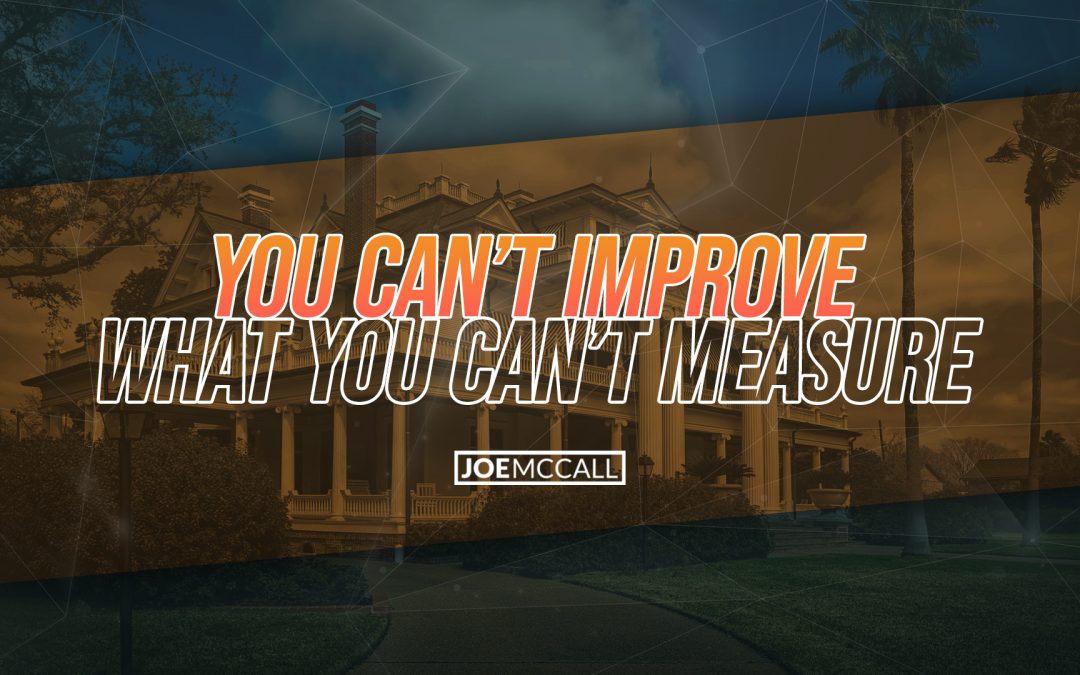 I want to talk about something today that is really important…

If you don’t know your numbers, you don’t have a real business.

Let that sink in a little bit…

I’m going to say it again: If you don’t know your numbers, you don’t have a real business.

Ok, let me back up a little and explain…

But if you really dive deep into the data, you would be shocked at what you see under the hood. Most investors are claiming they’re doing a lot of business and a lot of deals…. but what you don’t see is how much money they’re spending on marketing and their overhead.

If you hear investors boasting about their rental properties and how many doors they have… know that a lot of them don’t even realize how much money is going out the door on vacancies and repairs and maintenance and capital expenditures and bad tenants and bad property managers. :-/

I actually think that 90% of all the investors out there who own rental properties are only making 15% to 20% of what they think their actual cash flow is.

Let’s say they’re bringing in $300 a month cash flow. That’s $3,600 bucks a year. Well, guess what? One furnace, a hot water heater, air conditioner, roof, a bad tenant who trashes the property or doesn’t pay their rent for a few months, you have to go in and clean it and replace the carpet, paint the walls, get a new tenant in there, pay the property manager one whole month’s rent as a fee to place the new tenant…

All of a sudden that cash flow you thought you had the past couple of years is gone.

Stop the peacocking. Stop the bragging.

Simply look at the data.

I want to challenge you to think about this. You’ve got to know your numbers in your business. And, I’m gonna out myself — I’m not the shining example of this. Well, I wasn’t. I am now.

Only within the past couple of years have I really taken this to heart and started to dig into my numbers with weekly reports from my team. Not just from the deal side, but from the cash flow side too.

You’ve got to know those numbers.

You need to be able to tell with just a simple glance at a report, what your average cost per lead is, your average profit per deal per marketing channel — your cost per deal using whatever postcard to probates, for example.

Let’s say you’re doing Facebook ads for motivated sellers. Great! But if you’re spending 3x as much money as you’re getting back from those ads, uh, you don’t need me to tell you that’s no good.

Now, that doesn’t necessarily mean you should stop doing Facebook marketing, it means to know your numbers and spend your money wisely by knowing: cost per lead, cost per deal, profit per deal.

Remember, some deals are more profitable than other deals. You just might find that your probate marketing gives you more profitable deals. So, if your deals come from probate and your cost per lead is 5x as much for probates as it is for other types of marketing, it’s ok because your deals are so much bigger.

You won’t know any of those crucial details unless you know your numbers.

Here’s the cool thing. You can start small:

People are all up in social media, right? Well, let’s say your Insta post gets 1,000 likes. Congrats. How many leads did it bring you? How many deals? How much profit per deal? Is it making you money?

When you think of it that way, all of a sudden those 1,000 likes don’t seem to matter much, do they?

What really works? The numbers will tell you.

It’s worth saying one more time: Know your numbers.

Don’t be so hard on yourself! But no excuses either.